The green roof on the Coleman A. Young Municipal Center. (Trisha White)

The green roof consists of pre-vegetated modules that were delivered ready for implementation. (Trisha White)

The Detroit-Wayne Joint Building Authority needed to replace the roof of the Coleman A. Young Municipal Center (CAYMC), but a tight budget, limited access to the roof, and weight limits meant creative solutions would be required. Working closely with Hines, the authority collaborated with roofing experts and used new green building technology to install a modular green roof system without adding to the project cost or weight to the building. The final product demonstrates the city’s commitment to sustainability and provides a model for other public entities, while creating operational savings for taxpayers.

Constructed in the early 1950s by the Joint Building Authority, the CAYMC serves as the Detroit government headquarters and home of Wayne County’s probate and circuit courts. The CAYMC consists of two towers—a 14-story office tower and a 20-story court tower. Designed by the architecture firm Harley, Ellington & Day, the modernist international-style building is a centerpiece of the downtown district.

When the building’s roof was first replaced in 1985, the structure’s design restricted roofing options to lightweight 12-inch-square (30.5 cm) pavers. Over decades, harsh Michigan winters took a toll on the pavers, and by 2010, the building was due for another roof.

That allowed the authority to explore strategies to offset a stormwater discharge fee recently imposed by the Detroit Water and Sewerage Department (DWSD), as well as energy costs. All customers—including government entities, but excluding properties with less than 0.02 impervious acres (81 sq m)—are charged for drainage based on pervious acreage in order to mitigate the effects of the city’s average annual rainfall of 32 inches (81 cm).

“Reducing stormwater runoff is an essential environmental and economic goal in southeast Michigan and beyond, and we are very pleased that this green roof project contributes to this goal.”
—Gregory McDuffee, executive director, Detroit-Wayne Joint Building Authority

Historically, Detroit has spent billions of dollars on gray infrastructure to reduce combined sewage overflows, but more recently has moved toward green infrastructure as a substitute for costly sewage treatment centers and hard infrastructure updates. “We modified our mission statement to include operating in an environmentally appropriate manner, so we look at initiatives like this as mission driven,” said Gregory McDuffee, executive director of the Detroit-Wayne Joint Building Authority.

During the demolition phase, the project contractor noted that while some of the pavers were crumbling, the membrane beneath was in excellent condition. The pavers had protected it from ultraviolet radiation and the flashings had been maintained, with no leaks or compromised areas at the perimeter. “So, the question became, do we need a roof replacement or simply a restoration?” said McDuffee.

The ultimate plan to restore the roof while minimizing disruption to building operations was:

The incremental roof plan would allow the authority to implement green infrastructure over time without adding extra weight—and at the same cost as replacing the damaged pavers.

The green roof uses Easy Green roof modules, which have an interlocking water retention layer, filter fabric, and root-reinforcement layer. The modules, delivered pre-vegetated and ready for placement, are created by Elevated Landscape Technologies (ELT), a global company specializing in sustainable building technologies that include pre-grown green roof and wall systems. Easy Green roof modules can be used with retrofits or new roofs, whether they are flat or sloping, and they thrive in all climates.

Tradesmen systematically removed 500 square feet (46 sq m) of paver material from an area on the office tower and discarded the pulverized material. Intact pavers were set aside and eventually used to replace damaged pavers on other areas of the 37,000-square-foot (3,500 sq m) roof. All spoils were removed, and the project was completed in three days with minimal disruption to building operations.

Materials were lightweight and easily transported via the freight elevator. Green panels are installed dry and watered after they are in place, significantly reducing the weight and labor needed to get them to job sites.

Installation of 500 square feet (46 sq m) of green modules took just over one hour, creating a seamless carpet of sedum. In the years since, Hines has overseen the installation of sedum panels in 500-square-foot increments, with the goal of replacing the entire office tower roof.

Replacing the pavers with sedum panels will reduce the cost for roof membrane repairs over the long term, prolong the life of the membrane material, and reduce stormwater drainage fees by 15 percent.

“We wanted to provide an example for how the public sector can operate in a sustainable manner, which has then translated directly into operational savings,” said McDuffee.

By converting to a green roof using an incremental plan, the authority was able to invest in green infrastructure that will save about $60,000 a year in taxpayer money for operations while reducing stormwater runoff. Further, the investment is eligible for a 50 percent matching grant from DWSD that will substantially reduce upfront costs.

The sedum panels have created a vibrant habitat for honeybee colonies; in about 2013, the authority installed hives on the roof to support bee population growth and further demonstrate its commitment to sustainability.

In many cases, retrofitting the existing roof of an older building has great potential. Modular systems allow roofing contractors to learn about and become familiar with green roofing methods and take advantage of warranties from major manufacturers. 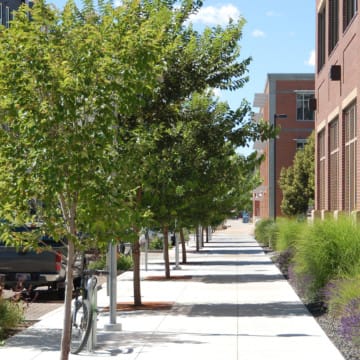